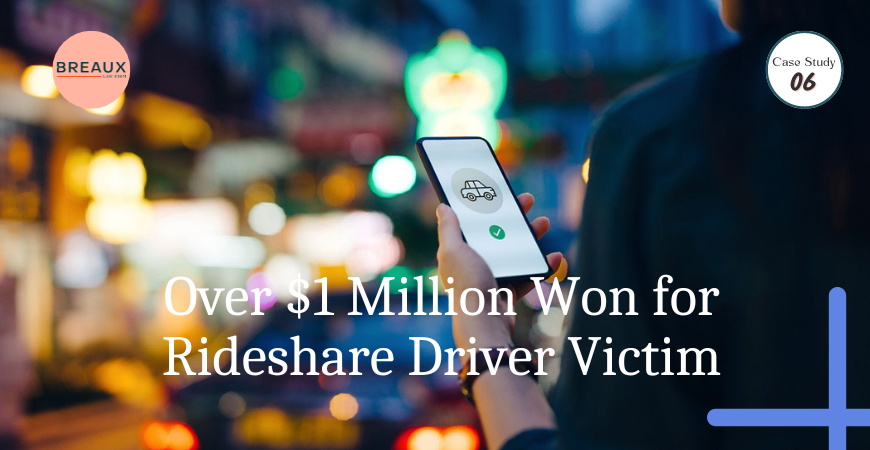 In 2021, Breaux Law Firm won $1,045,000.00 for our client, a middle-aged woman struck by another car while working on the clock as a rideshare driver in New Orleans.

The accident was a serious rear-end collision with heavy property damage. The total loss of our client’s vehicle—occurred in 2018. Our client was driving on the clock for a rideshare service when she was rear-ended by a personal vehicle at an extremely high speed. Having injured her lower back and suffered a herniated disk with nerve root impingement. She underwent a costly and intense lumbar fusion.

However, $250,000.00 did not fully compensate our client for her injury and surgeries. Her expenses were costing her much more. The rideshare company she worked for had a commercial auto insurance policy. That covered underinsured motorists while she operated her personal vehicle as a rideshare vehicle. The personal injury attorneys at Breaux Law Firm knew that if you’ve exhausted the underlying auto insurance policies—in this case, the other driver’s $250,000.00 policy—yet are still not fully compensated for your injuries and damages, you can make an underinsured claim with the rideshare company’s insurance policy. Knowing this, we confidently made an underinsured motorist claim to compensate her for the rest of her damages on that policy.

There’s an important rule in Louisiana based on the case McDill vs. Utica which asserts that uninsured or underinsured motorist claims operate under a different set of rules than liability claims. When you provide satisfactory proof of loss, the auto insurance company must tender a reasonable amount to the claimant within 30 days. If they fail to do so, they can be subject to a penalty. The penalty includes 50% of the final settlement on top of the final settlement. This means that if the rideshare company’s insurance failed to tender a reasonable amount within 30 days, and that failure is deemed to be arbitrary, capricious, or without probable cause, the $1,000,000 would become $1,500,000. If the rideshare’s insurance company failed to tender a reasonable amount within 60 days, the penalty is attorney’s fees and double the final settlement or judgment.

In the example of this case study, the underinsured motorist carrier tendered a mere $85,000.00 in an untimely manner, after the 30-day period. At Breaux Law Firm, our attorneys took multiple positions. First, this was not a reasonable amount. Second, it was tendered too late. And third, the insurance company needed to address the penalties that they now faced. Had our client been paid a reasonable amount within 30 days, even another $100,000? the rideshare’s insurance company would have been able to settle the case. But the insurance company refused. However, the law was on our side. After two years of fighting, during which our client underwent another lumbar surgery, the lawsuit finally went to mediation. We ended up mediating for an additional $675,000.00, due to the rideshare’s insurance company’s negligence. The initial $285,000.00 from the at-fault driver’s insurance policy. Plus the $85,000.00 from the rideshare company’s underinsured motorist coverage. Plus $675,000.00 (additional values owed and some consideration toward likely penalties) added up to an incredible total of $1,045,000.00 for our client.

What Did We Do?

Due to their refusal, the rideshare company suffered a major punishment. We were able to teach them a lesson about the laws in Louisiana. And how they need to treat rideshare drivers in our state. The company that insures the drivers of this rideshare company should have known about Louisiana laws—in particular. In 1985 Louisiana law only applies to insurance companies that write underinsured motorist policies. The rideshare company’s defense attorneys and insurance adjuster doubted that anyone was willing to do the work to push the issue, but at Breaux Law, we know the law inside and out. When they resisted, we fought harder for our clients. Due to our knowledge of the law, our willingness to fight back. Through our tireless efforts over two years, we were able to provide personal attention to our client and hold the insurance company accountable. That’s the Breaw Law Firm trademark—in terms of how we treat our clients, how we fight for you, and our success.

We are here for you as your personal injury lawyer. Don’t feel hesitated- Just pick up your phone and make a call to (504) 914-7779. We are committed to providing the best commitment.