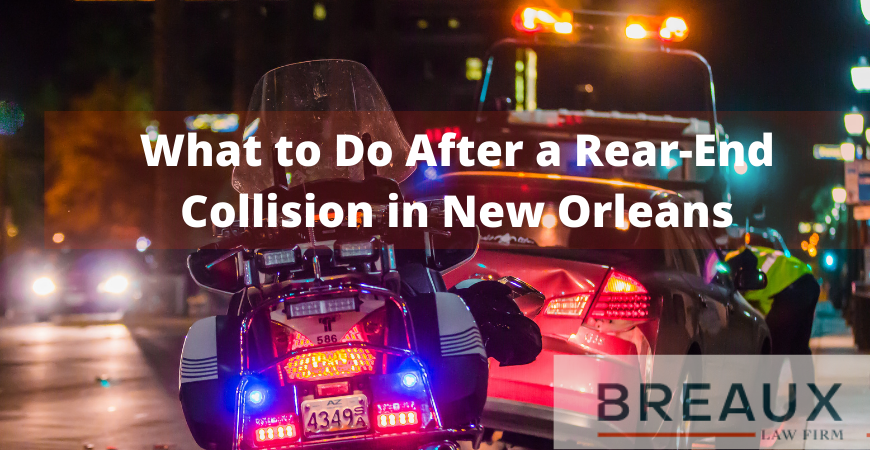 What are some important steps to take immediately after a rear-end collision? In this article, we explore what not to do by looking at the real-life example of a Breaux Law Firm friend (not client—an important distinction!) who made a series of missteps in her first rear-end collision in Louisiana.

Since, rear-end accidents are common in New Orleans, Louisiana, and other states of the USA;  This comprehensive article will help you to stay safe and aware of the risks after a sudden rear-end collision:

A friend of Breaux Law Firm’s once shared with us a perfect example of what not to do in a rear-end collision in New Orleans:

“I had just moved to New Orleans from California. I had not even registered my car yet, and still had California license plates. I was driving the I-10 to Baton Rouge with a friend when it began to rain. But not just a light rain—it was one of those heavy rainstorms where the sky opens up and what seems like a blanket of water totally obstructs your view of the cars in front of you! I had never driven in rain like this.

All the cars on the highway slowed down to a crawl. I did, too. I was so scared, just white-knuckling the steering wheel. But I didn’t stop completely—and so I suddenly rear-ended the Ford truck in front of me. The driver and I pulled into the median and surveyed the damage, still in the pouring rain.

At the slow speed, I was going, my Toyota Corrola’s hood crumpled in a bit and the front bumper was damaged. The Ford had no damage.

The driver said he was fine. We exchanged information and insurance policies. And then, because there was no damage to his truck or to him, and because it was raining so hard, I said I didn’t need to call the police, didn’t need him to stick around, and would just call for a tow truck. So he drove off! (He must have been happy to realize what a naïve driver he was dealing with.)

This was 2006 before phones had cameras. I had no evidence that his sturdy truck was fine—it didn’t even have a dent. I called my insurance company to report the accident.

A few weeks later, I received a call from the insurance company to ask if my passenger or I had any injuries. I said no one was injured in the accident; it was very minor, as I could not have been going more than 10 miles per hour.

My insurance provider told me the driver I rear-ended had sustained $50,000 worth of damage to his truck and himself. I was aghast. $50,000?! I said no one was injured in the accident and it was just a fender bender that occurred while all the vehicles had slowed to a crawl, due to the rainstorm!

The insurance representative told me the other driver had claimed this much in damage, and they would not fight him on it.

If we went to court to fight against the driver’s claim, a jury would never side with me, an out-of-state driver. My insurance company’s hands were tied. The other driver received his payment, and my insurance premium went up.”

When Breaux Law Firm heard this story, our hearts broke for this admittedly naïve young driver and each of her missteps. We are dedicated to treating each of our clients as if they were part of our own family, so it pains us to think of how poorly prepared this driver was for her first rear-end collision.

Let’s go over what we wish this driver would have done differently. We hope this helps you and your loved ones stay safe on the road and make good decisions that protect you and your rights.

What Is Rear-end Collision?

In most cases a rear-end collision causes minor fender-benders; however, it can also cause severe damage and injury.

According to the Center for Analytics & Research in Transportation Safety (CARTS) study, in 2021 there are about 9917 rear-end crashes in Louisiana. Approximately  31.29% of them resulted in injuries, 32.28% caused property damages, and  11.86% of collisions are fatal. This study shows an alarming impact of this type of accident in Louisiana.

The most common causes of Rear-end collisions are:

How the Laws Work in Louisiana for Rear-End Collision?

Louisiana Revised Statute 32:81 states: “The driver of a motor vehicle shall not follow another vehicle more closely than is reasonable and prudent, having due regard for the speed of such vehicle and the traffic upon and the condition of the highway.”

Hence the driver of a motor vehicle who rear-ends its preceding vehicle is presumed to be at fault for causing the rear-end collision.

Additionally, Louisiana is a comparative fault state, meaning all parties involved in an accident can be found to be partially at fault for the accident and the compensation will be determined by the percentage of fault of each party.

For this reason, the rear-ending driver has the chance to prove himself guilt-free or partially liable by showing evidence and documents of the crush.

The driver who caused the rear-end collisions can free himself of fault by proving the following things:

To prove the above points, the rear-ending driver has to present documents such as pictures and videos of the involved vehicles and scene, police reports, witness’s contact information,  assessment report of the injuries and damages, etc.

What to Do After a Rear-end Collision?

If you’re involved in a rear-end collision, it’s important to keep calm and to do a few critical tasks at first. Though every type of accident is too overwhelming to take proper steps, you shouldn’t panic. Take deep breaths for stress releasing and then check yourself and other passengers for injuries and call for immediate medical assistance if necessary.

Whether there are minor or major injuries and damages, you should always contact the police to avoid any inconvenience, deceptive threat, and attack after the accident.

The following tips are recommended to follow for both circumstances whether someone rear-ends you or you rear-end someone’s vehicle.

1. Always Wait for the Police

Having a police report could have prevented the other driver from claiming so much damage to his truck, which may or may not have been insurance fraud. The same goes for bodily harm, although we do want to acknowledge that some physical pain after a rear-end collision, like whiplash, can show up days after the event.

It sounds like our young driver believes she was not going fast enough to cause whiplash, but ultimately, that is something best decided by the victim’s physician. Still, having a police report—as an unbiased third-person account of the car accident and its immediate aftermath, including property damage and injuries—would certainly have given the driver and her insurance company more of a leg to stand on when negotiating the details of the claim and the settlement.

Granted, this car accident took place in 2006, before camera phones were an everyday object. So we can understand the lack of photos in this situation. But in today’s world, there is no excuse for not taking photos of a car accident. Having photos can prove the extent, however large or small, of the accident and property damage.

Take as many photos as you can. It’s important to take photos of all cars involved, any injuries, and a 360-degree view of the surrounding context (traffic lights, stop signs, surrounding businesses, road hazards, etc.). You never know where you might find a video surveillance camera that can lend credibility or proof to your argument. Try, if possible, to take photos of the interiors of the vehicles, as well.

3. Do Not Admit Fault

This young driver may have missed out on some aspects of the rear-end collision that could have led to partial or shared fault. For example, did the driver of the Ford truck have working brake lights? Perhaps the collision was caused in part by rain, but also due to non-working brake lights.

Another possibility is that the car in front may have created an emergency that led to them breaking abruptly for no reason—in which case, the car in front could be at fault for the accident. For example, if the man driving the Ford was texting during the heavy rainstorm, and accidentally slammed on his brakes due to being distracted, he would be considered at fault because it is illegal in Louisiana to text while driving.

By letting him drive away before a police report was made, our young driver essentially admitted fault. Had she waited for a police report and stood her ground, saying she was driving slowly and cautiously and did not see him break in front of her, she might have been able to make a case for shared fault.

Since this was a rear-end collision, the young driver assumed she was to blame. However, it is always a good idea to contact an accident attorney before you write off an accident as your fault. By reaching out to experienced personal injuries attorneys, like those at Breaux Law Firm, she could have had professionals explore the ins and outs of her case before her insurance company made their final decisions.

For example, we noticed there was another rider in her passenger seat. This individual could have been interviewed to help ascertain the extent of the damages and as proof of the minimal impact of the collision. Insurance companies often won’t go above and beyond when researching an accident. They are more likely to make small payments for your claim or the other drivers’ claims, to wrap things up quickly and painlessly (for them).

But this often is to your own detriment. A personal injury lawyer will delve into your case, researching it thoroughly and helping you understand your options.

Everything in life is a learning experience, and we’re sure this driver now knows the proper steps to take after a rear-end collision in Louisiana (or in any other state). We hope you feel more confident, too.

Get Help After a Rear-end Collision in New Orleans

If you have any questions, or if you or a loved one were involved in a rear-end collision in New Orleans or Louisiana, please reach out to us at once. Your consultation with us is always free. Breaux Law Firm provides personalized attention and care to each of our clients, and we fight for you as if we were fighting for one of our own family members. Contact the team at Breaux Law Firm for help today.