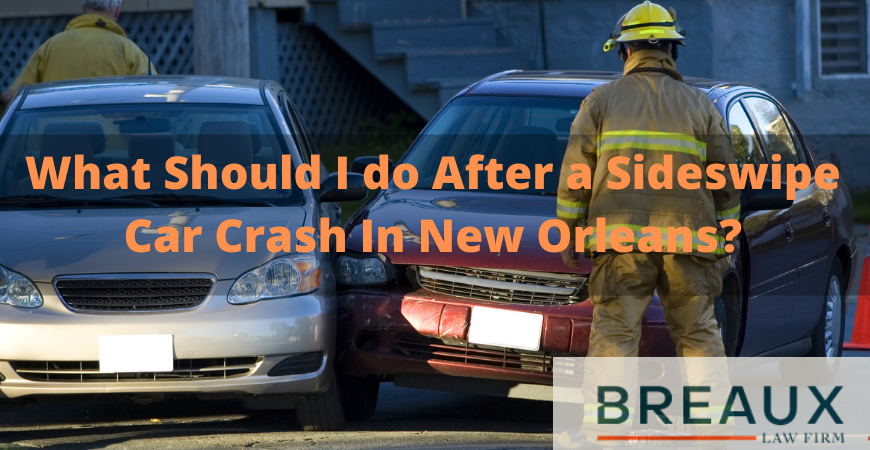 Many people are unaware of, or unconcerned with, the risks of a sideswipe crash. However, sideswipe collisions occur frequently and can lead to injury, damage, and complications—especially if the other driver speeds off! We’ve explained why sideswipe accidents are serious, and what to do if you are involved in one.

What Is a Sideswipe Accident?

When the sides of two vehicles make an impact, the accident is called a “sideswipe” collision. The two cars may be traveling in the same or opposite directions, and the car accident might be minor, with little damage, or a momentary impact that sets off a chain reaction leading to huge damages, serious injuries, and even death.

Sideswipe collisions happen very frequently. Sometimes they cause life-threatening injury and irreparable loss. Apparently, many people are unaware of, or unconcerned with, the risks of a sideswipe crash. However, the reality is sideswipe accidents account for 27,000 injuries and 2,500 deaths every year, according to research by the Insurance Institute of Highway Safety.

What to do After a Sideswipe Accident?

There are some important initial steps you need to take immediately after a car accident.

Who is at Fault For a Sideswipe Accident?

The driver who fails to maintain a single lane while driving is the party at fault for a sideswipe collision. Under Louisiana Civil Code RS 32:79, “a vehicle shall be driven as nearly as practicable entirely within a single lane and shall not be moved from such lane until the driver has first ascertained that such movement can be made with safety. Drivers of vehicles shall obey the designated signs for moving vehicles in a particular direction.”

If a driver tried to change the lane of travel or swerved into another lane unfairly, a sideswipe accident happened and this individual is liable for the crash. However, liability for the accident will be imposed on another driver if s/he is found negligent while driving or forces the deviating vehicle to go out of its own lane of travel. If both drivers attempt to change lanes simultaneously and make an impact, then both are liable for the accident.

What if the Driver Who Sideswiped Me Drives Away?

Unfortunately, it is common in New Orleans for a car that sideswipes another car to quickly drive away from the scene of the collision, even though a driver is legally required to stop their car and give their identity. The driver who chooses to leave the scene is committing a felony and faces serious consequences if they are later found.

In Louisiana, the punishment for a felony hit-and-run accident—whether or not the accident results in serious injury or death—can result in fines and serving time in prison.

If you are in a sideswipe collision and the other driver speeds off, try your best to gather any information on the car. The most ideal possibility is that you, your passenger, or an eyewitness to the accident can take a photo of, or quickly write down, the other car’s driver’s license plate, as this is traceable by the police.

The second best option is that you, your passenger, or an eyewitness can gather the car’s make, model, and color. Then, call the police, and proceed with the steps listed above. File a claim with your insurance company as soon as possible, and be sure to see a doctor.

Through the police report and the investigation on behalf of each insurance company’s insurance adjuster, liability will be determined. Louisiana is a “pure comparative negligence” state, which means each driver involved in an accident is held financially responsible for the percentage to which he or she is deemed at fault.

This is where hiring a personal injury attorney can be a crucial next step. An attorney will be able to review your case for free, evaluating the evidence and details to assess whether or not your percentage of liability is accurate.

If you and your lawyer disagree with the insurance adjuster’s assessment of liability or with the settlement offered by the other insurance company, you can pursue legal action, such as a lawsuit.

Who Should I Reach Out To?

Being in a sideswipe car accident is scary, anxiety-inducing, and overwhelming. At Breaux Law Firm, we want to make your process of recovery painless and peaceful. Having been in business for decades, we know how important it is to treat our clients like family.

And as a family-run business, we are determined to fight for our clients as if we were fighting for one of our own family members. If you’re unsure about what to do next, give us a call. Our reputation speaks for itself. We’re ready to fight for you.