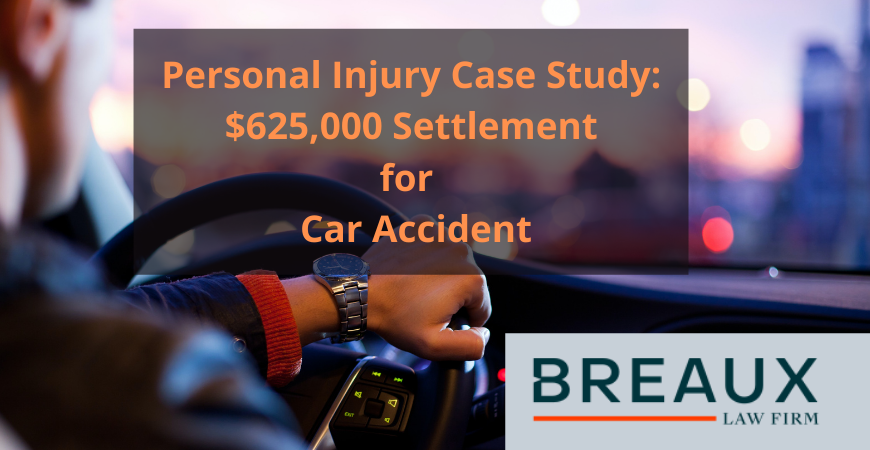 In 2021, Breaux Law Firm won $625,000 for a 45-year-old victim of a car accident. He was driving in Iberville Parish, between Baton Rouge and LaPlace, on Highway 69, when he found himself caught in a horrible three-car accident that changed his life and career forever.

Details of The Car Accident

Our client was stopped on a two-lane highway behind a cement truck that was making a left turn onto a smaller road. As he was making the turn, the cement truck driver momentarily fiddled with a lever and, in doing so, hit an oncoming car. The cement truck was sent flying into our client’s car. The insurance company denied responsibility, arguing that the third car involved in the pile-up must have been speeding or otherwise at fault—a claim that was simply not true.

The Severity of Our Client’s Injuries

Our client suffered from neck and back injuries. His radicular symptoms included pain down his legs and arms. He had neck fusion surgery and received Bone Marrow Aspirate and Stem Cell Injections, a cutting-edge regenerative therapy to help accelerate the body’s natural healing process. Whereas Radiofrequency Ablation (RFA), also known as rhizotomy, is the old, traditional approach to stopping nerves from sending pain signals, the pain is only temporarily lessened. This latest approach, using stem cell technology, regenerate the nerves, and our client was lucky to receive such an innovative procedure for his recovery process.

Impact On Our Client’s Earnings

In addition to physical symptoms, our client suffered a major loss of earning capacity. To better understand the depth of how his earning capacity had changed, Breaux Law Firm hired a vocational rehabilitation specialist to accurately calculate our client’s financial loss. The vocational rehabilitation specialist determined that, due to his debilitating injuries, our client’s necessary shift from his laborious job, making over $70,000 per year, to a less physically demanding, more stationary job in Information Technology, making roughly $34,000 per year, meant a cumulative loss of $38,000 per year for rest of his professional life.

The case dragged on for almost two and a half years, with the cement truck driver refusing fault and the commercial truck’s insurance company attempting to place blame on the other involved automobiles. But finally, after persistence and hard work, evidence from the dashboard camera video—which had been preserved due to the quick thinking of Breaux Law Firm attorneys—revealed the truth. The cement truck driver’s total fault in the accident was clear. The case settled one month before it went to trial. Justice was served and our client was awarded the fair compensation he deserved. He was able to move on from the accident, heal, and continue to financially support his wife and children.