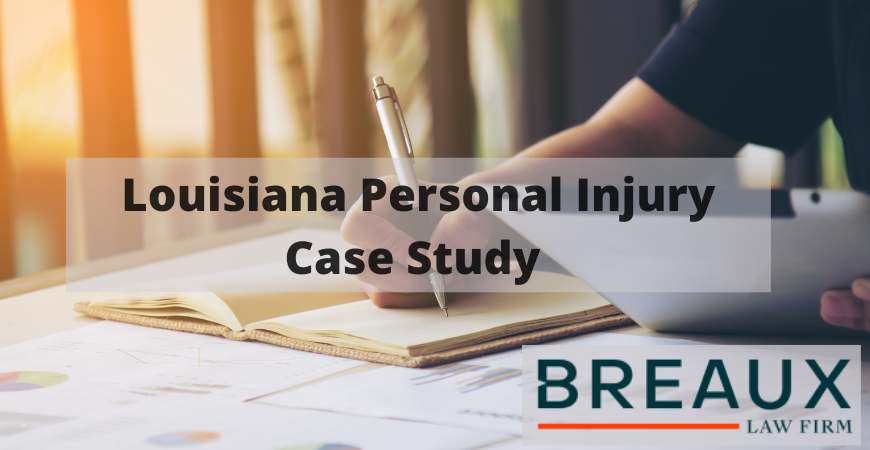 In Hammond, Louisiana during October of 2016, a hardworking husband, father, and breadwinner in his late thirties was unexpectedly struck by another driver who ran a stop sign. The man immediately reached out to Breaux Law Firm for help. We had previously represented his wife, and the young couple knew they could trust our experienced attorneys to get powerful results.

Having been T-boned on the driver’s side of his automobile at a 4-way stop by a driver who completely disregarded a stop sign, our client experienced a number of serious injuries in his lower back.

He had a herniated disk and two locked facet joints in his lumbar spine, which required multiple epidural steroid injections (known as ESIs) and one rhizotomy, a surgical procedure that attempts to alleviate nerve pain by killing the nerve fibers that are sending pain signals to the brain. Finally, a spinal fusion, an orthopedic surgical technique that fuses two or more vertebrae together for zero movements, was the treatment that successfully relieved him of his pain.

In this heavy-impact car accident, our client required significant treatment, including multiple visits to a chiropractor, neurologist, and orthopedic surgeon. An articulate, honest, and likable young man, he continued to work despite his overwhelming pain and numerous medical appointments. He had no choice but to work while in pain. As he explained, “If I don’t work, I can’t pay my bills, pay my mortgage, or feed my family.” We admired his tenacity and ability to continue his daily life while in debilitating pain, and we fought hard to ensure that his medical bills and past and future pain and suffering would be fairly compensated.

The other driver’s insurance company initially offered our client only $70,000—an amount that was far below his medical expenses. So we fought harder. The case was ultimately resolved at mediation, and we were proud to win a $499,000 settlement for our deserving client.