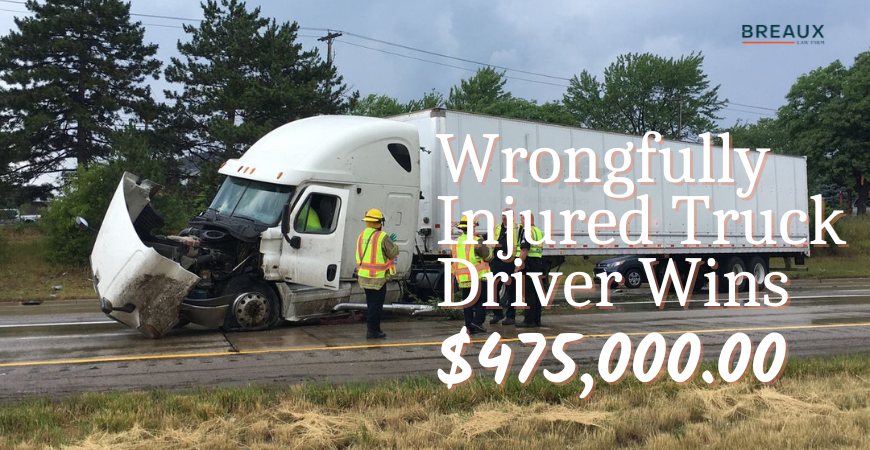 Among the many cases every day there are some that are really very inspiring to us. I would like to share one such case study with you today.

Just before Christmas of 2014, a truck driver working for a company that transports hazardous material was in a terrible accident in Bastrop, Louisiana.

While trying to transfer hydrochloric acid into his truck via a hose, his equipment failed. Hydrochloric acid began spraying everywhere, including beneath his protective gear and even knocking off his eye protection. Despite being rushed into a safety shower, the truck driver experienced a substantial chemical eye injury that forever diminished his vision and damaged his body.

The victim turned to Breaux Law Firm for help. We had previously represented his wife, so the couple trusted us to understand the nuances of the case and to fight for them. After a lengthy in-depth investigation into a liability, and our client undergoing numerous visits to ophthalmologists, we were able to determine the parties at fault and fight for his fair compensation.

Although the driver was at work at the time of the incident, this was not a worker’s comp issue; the fault fell largely on the tank wash company, due to their poor equipment. Our investigation found that personnel at the chemical company had previously noticed something wrong with the hose and had requested repair. The tank wash company had allegedly repaired the hose but had done so ineffectively, and it still ruptured.

As experienced personal injury attorneys who had dealt with cases such as this in the past, we knew that in fact many parties were liable for our client’s injuries and subsequent loss of income, from the tank wash to the owner of the hose, to the company contracted to repair the faulty hose.

If the property you own is defective and causes harm to someone else, you are held responsible. Yet these parties denied responsibility every chance they could, pointing fingers at each other instead. They even tried blaming our client for the accident, but it was not his responsibility to inspect the equipment, nor was he qualified to evaluate the equipment’s safety. Though the case lasted five long years, we finally settled at mediation and our client won $475,000.00 for his lost wages and medical costs.