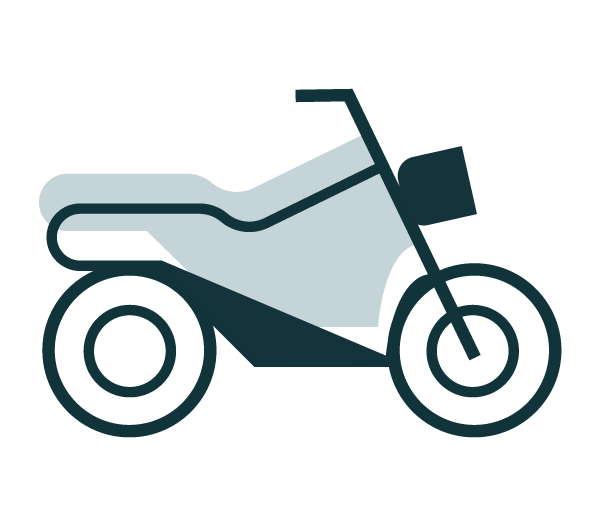 Whether you’re looking for adventure, convenience, or fuel-efficiency, motorcycles have it all. From Harleys to high-performance sports bikes, nothing can compare to the wind in your face as you ride down a highway. However, significant risk is involved.

While Louisiana’s open, winding roads are the ideal place to enjoy your motorcycle, when it comes to accidents on the road, motorcyclists are at greater risk of losing their lives than passengers in a car. To understand the complexities of motorcycle accidents and how they are dealt with, you should be aware of a few statistics that can help you stay safe.

Safety measures can mean the difference between life and death on a motorcycle. Knowing specific statistics can help motorcyclists stay cautious, especially if they know what to look for. According to Louisiana State University:

Although the number of motorcycle accidents has decreased compared to previous years, this doesn’t mean the risk of driving a motorcycle is lower.

However, when every motorist on the road is cautious, it can save lives; one type of precaution that can be taken is the wearing of a helmet while riding motorcycles in New Orleans or elsewhere in Louisiana. Helmet use reduces the risk of fatality by 37% and helmet usage also decreases the risk of injury to the head by nearly 70%. Of the less than 100 motorcyclists who were killed in 2019, about one-third of those accidents involved alcohol.

Additionally, most motorcycle deaths occur in the summer months and riders over the age of 50 make up more than one-third of the fatalities.

Time of day plays another factor in motorcyclist safety. On a weekday, after the morning rush, around 9 am, is one of the safest times for motorcyclists to be on the road. Conversely, during rush hour, between 3 pm and 6 pm, is when most accidents occur. Due to the number of cars on the road and to the urgency to get home, drivers may get careless.

While there are a number of reasons motorcycle accidents happen, there are a few that reoccur nationwide. Here are the top ten reasons:

1. When a driver fails to assess the speed at which a motorcyclist is driving or the motorcyclist’s distance from their own vehicle, accidents happen. Additionally, when a vehicle suddenly stops and a motorcyclist is behind said vehicle, this can lead to serious bodily harm or death, especially if traveling at speed. It is important to be extremely aware of one’s surroundings while in a car or on a motorcycle to avoid such incidents.

2. When a driver doesn’t yield to motorcyclists, this is not only a traffic violation, but it’s extremely dangerous. The same concept applies to sudden lane changes by a vehicle. If a motorcyclist is in a driver’s blind spot and they change lanes without indicating, this can lead to a severe accident. Obeying traffic laws, such as signaling and giving ample notice to other drivers on the road when changing lanes, is important and ensures safety on the road.

3. A driver following a motorcycle too closely is a recipe for disaster. Not only is a motorcycle much smaller than a car, but it doesn’t provide the safety a car does; therefore, keeping a safe distance from a motorcyclist is key for both driver and motorcyclist.

5. Distractions or negligence can cause major accidents, especially for motorcyclists. If a driver is not paying attention due to texting while driving, talking to someone, or doing something other than keeping their eyes on the road, the threat of an accident to motorcyclists is great. Distracted drivers can be unaware of changes to the speed of traffic around them and often don’t see stop signs, traffic lights, or fixed objects. If a driver fails to obey traffic law, they will be found liable for an accident and damages will be owed to any injured persons as a result.

6. Driving while intoxicated or under the influence of drugs or alcohol increases the risk of an accident occurring. Driving while impaired is against the law. The consequences of a driver getting behind the wheel while drunk and getting into an accident are serious.

7. Fatigue is a major cause of motorcycle accidents. When someone is sleep deprived, such as delivery drivers who are on strict deadlines and drive across multiple states to reach their destination, accidents happen

9. Defects in motorcycles or any faulty part of a bike can lead to an accident and a driver can sue the manufacturer for defective parts that cause harm. If there is a lack of maintenance on a motorcycle or faulty repairs and an accident occurs, the motorcyclist can be seriously injured.

10. Hazardous road conditions can lead to accidents and, in Louisiana, if a biker is hurt due to a pothole or road hazard, the appropriate governing bodies whose responsibility it’s to maintain those roads can be held accountable.

Motorcyclists must take extra precautions to be as vigilant as possible when on the road, especially those who are new to motorcycling Over half of all motorcycle accidents are due to inexperienced motorcyclists, most of whom have been on the road for less than a year and have had less than three years of experience riding a bike.

Motorcycle accident injuries can take a long time to heal and can cause motorcyclists further trauma even after the accident or, worse, death. If you find yourself suffering from injuries due to a motorcycle accident but have not filed a claim, you may still have time.

Around the nation, motorcycle laws differ; at Breaux Law Firm, we know how the ever-evolving laws work here in Louisiana.

According to the Louisiana State Legislature, a few examples of Louisiana motorcycle laws include:

If You’ve Been in a Motorcycle Accident in New Orleans

When you’ve been in an accident as a motorcycle driver, you should take the following steps:

An experienced personal injury attorney at Breaux Law Firm can contact the responsible party’s insurers to negotiate on your behalf after an accident, especially when the other driver has been negligent and caused the accident. If the insurance company complies and you’re compensated for what you’re entitled to, then that’s a successful case.

However, if an insurance company doesn’t comply, Breaux Law Firm can take further legal action for you. Additionally, if you’ve lost a loved one in a motorcycle accident, Breaux Law Firm can help you get the compensation you’re entitled to by proving negligence and the reason for the death. Don’t hesitate to contact us; we’re here to serve you and protect your rights.

Hiring An Attorney With over 35 years of experience, we at Breaux Law Firm understand how to navigate the world of claims in New Orleans and Louisiana. You can rest assured that your case will be handled with the utmost respect and priority to ensure you receive the compensation you’re entitled to as quickly as possible. Our job is to get you the maximum payout you are due. We’re here to protect your rights.

By hiring a trusted law firm to represent you and your case, you can put your mind at ease; this will allow you to focus on recovering from your injuries. Let us do the paperwork, deal with the insurance adjusters, and get you the compensation you deserve.

If you or someone you know has been injured in a motorcycle accident, the attorneys at Breaux Law Firm are the best option for you, and here’s why:

Being in a motorcycle accident is scary enough, and dealing with the aftermath can be exhausting. Getting back on your feet should be hassle-free. If you call us and we determine together, that you have a case, we’ll immediately begin fighting on your behalf to make the responsible parties do what is right. We do not stop fighting for you until you receive all you’re owed.

By hiring Breaux Law Firm to represent you for your motorcycle accident, you can expect a clear legal explanation of your case and an honest assessment of the case’s merits. We can help you get through this difficult time and ensure you’re taken care of emotionally, physically, and financially.

Settle Your Motorcycle Accident Claim With One Call!

If you’ve been injured in a bike accident that was not your fault, you have a right to compensation that you deserve for damages. Although filing claims or reliving traumatic experiences can be overwhelming, moving towards the compensation you are due is the right thing for you and your family. You’re not alone in this fight. New Orleans motorcycle accident lawyer of Breaux Law Firm is just a phone call away Let us handle your case and get you what you deserve.